Black and Brown in Blue is a lecture series aiming to build a bridge between the community and law enforcement for a more inclusive community environment. The program was designed to encourage open and honest dialogue in order to reduce barriers and misperceptions.

Join us for a conversation with Kevin Kilgore. Kevin Kilgore began his law enforcement career in 1997 as a deputy sheriff, later becoming a municipal police officer in a suburb of Cincinnati. In 2006, Kevin moved to Los Angeles, California, and joined the University of California Police Department (UCPD), working at both UCLA and UC Santa Barbara.

During his fifteen years with UCPD, Kevin worked in almost every area of the police department as an officer, sergeant, and lieutenant in the Administrative and Operations Bureaus, including Patrol, Personnel and Training, Community Services, and Administration. Kevin served in critical roles related to community outreach and engagement, special events and dignitary protection, strategic planning, media relations, and the Police Chief’s Advisory Council.

In February 2021, Kevin moved to Sonoma County to serve as the Chief of Police for the City of Sebastopol Police Department where he oversaw and managed the Administration, Operations, and Technical and Support Services Divisions through August 2022. Kevin then began his tenure as Deputy Chief with the City of Rohnert Park Police and Fire Department of Public Safety overseeing and managing Police Services, including the Patrol Division, Traffic Unit, Investigations Unit, Professional Standards, and the SAFE Team.

For more information about the Black & Brown in Blue Series, contact mo.phillips@sonoma.edu. 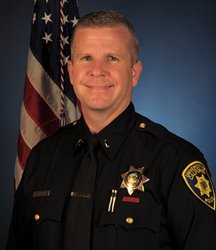 Join Student Involvement as we host a puzzling afternoon where you can race again the clock to finish a puzzle. Win a prize, hang out, and watch a magical movie: Now You See Me!

Join us for a discussion on how race, class, and gender have shaped voting rights in America over the past century, from ratification of the 19th Amendment to the coronavirus pandemic and the Black

Black and Brown in Blue is a lecture series aiming to build a bridge between the community and law enforcement for a more inclusive community environment.