In 1990, Marcus Shelby received the Charles Mingus Scholarship to attend Cal Arts and study composition with James Newton and bass with Charlie Haden. Currently, Shelby is the Artistic Director of Healdsburg Jazz, an artist in residence with the Yerba Buena Gardens Festival, and a past resident artist with the San Francisco Jazz Festival and the Healdsburg Jazz Festival. Shelby has composed several oratorios and suites including “Harriet Tubman”, “Beyond the Blues: A Prison Oratorio”, “Soul of the Movement: Meditations on Dr. Martin Luther King Jr.”, “Black Ball: The Negro Leagues and the Blues”, “Green and Blues”, and a children’s opera “Harriet’s Spirit” produced by Opera Parallel 2018. Shelby also composed the score and performed in Anna Deavere Smith’s Off-Broadway Play and HBO feature film “Notes from the Field” (2019). Shelby is also the voice of Ray Gardener in the 2020 Oscar-Winning Disney Pixar film “SOUL”.  Shelby has also worked with a range of artists including Angela Y. Davis’ “Blues Legacies and Black Feminism” (2019), Joanna Haigood’s “Dying While Black and Brown” (2014), Margo Hall’s “Bebop Baby” (2013), and “Sonny’s Blues” (2008), the Oakland Ballet’s “Ella” The SF Girl Choir (2013), The Oakland Youth Chorus (2014), and many other productions over the past 23 years. Shelby has served on the San Francisco Arts Commission since 2013 and has worked with the Equal Justice Society for over 20 years. The Marcus Shelby Orchestra has released 5 CDs--“The Lights Suite”, “Port Chicago”, “Harriet Tubman”, “Soul of the Movement: Meditations on Dr. Martin Luther King Jr.”, and “Transitions”.

Jeff Jarvis
Jeff Jarvis has distinguished himself as a trumpeter, composer, jazz educator, and music publisher. He serves as Director of Jazz Studies at the Bob Cole Conservatory of Music at California State University, Long Beach and frequently appears as a honors jazz band conductor, clinician and lecturer. Jeff is the Music Director Emeritus of the Central New York Jazz Orchestra and is a former Vice-President of the International Association For Jazz Education. Jeff is part-owner of Kendor Music, Inc., the first educational music publisher to provide jazz charts written especially for students.

Mr. Galisatus is in demand as a guest conductor and clinician throughout the western United States, including organizations such as the Monterey Jazz Festival, the Stanford Jazz Workshop, California Alliance for Jazz, and a host of others. In addition, Mr. Galisatus has presented workshops abroad, including Japan, China, Norway, Mexico, and Canada. 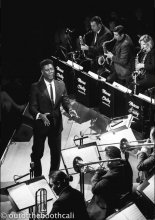 Born in Jerusalem, Israel with Greek and Iraqi roots, Lior Ben-Hur has traveled to over a dozen countries where he spent time learning, performing and sharing experiences with musicians a