Adapted from a 1909 novel by Jack London yet set in a provocatively unspecified moment in Italy’s history, MARTIN EDEN is a passionate and enthralling narrative fresco in the tradition of the great Italian classics. Martin (played by the marvelously committed Luca Marinelli) is a self-taught proletarian with artistic aspirations who hopes that his dreams of becoming a writer will help him rise above his station and marry a wealthy young university student (Jessica Cressy). The dissatisfactions of working-class toil and bourgeois success lead to political awakening and destructive anxiety in this enveloping, superbly mounted bildungsroman. Winner of the Best Actor prize at the Venice Film Festival and the Platform Prize at the Toronto International Film Festival. Directed by Pietro Marcello. (in Italian w/English subtitles) 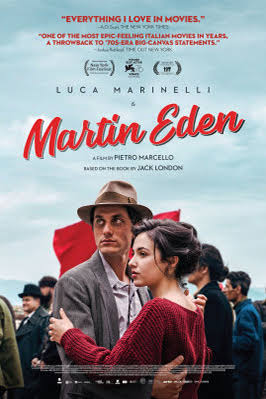 Sonoma State University will host more than 40 hours of lectures, panels and performances to raise awareness of social justice issues as part of “Social Justice Week.” These lectures are sponsored

The award-winning documentary film 4 Wheel Bob tells the story of Bob Coomber, an intrepid adventurer who sets out to be the first wheelchair hiker to cross the 11,845-foot Kearsarge Pass

Grab some friends and join us for a movie night with Frozen 2.  Watch Elsa journey with Anna, Kristoff, Olaf & Sven to find out why she was born with magical powers & why her kingdom is bei